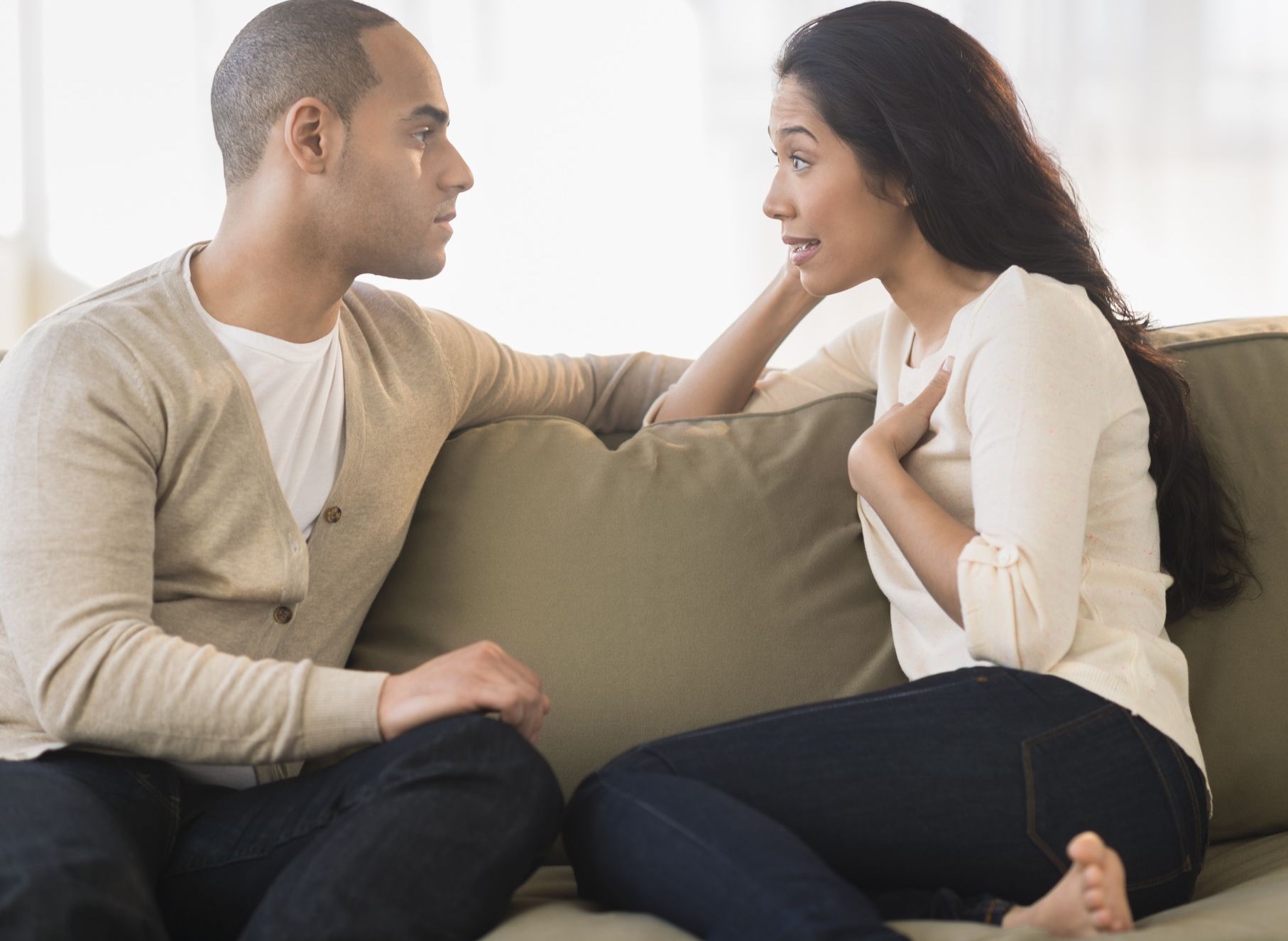 Many different statistics from various sources contradict themselves, but it is estimated that anywhere from 70-80% of people under the age of 50 have some form of oral herpes (HSV-1) and that about 1 in 5 people over the age of 14 have genital herpes (HSV-2). Obviously, most people would have neither if they could choose, but HSV-2 has proven itself to be a lot more problematic, especially when it comes to dating. It’s something that a lot of people feel they have to disclose when meeting new people because almost nobody with a little bit of decency wants to transmit the disease to someone else who may not have it. Because this can stir up quite a bit of drama and can make for an awkward discussion topic, a lot of dating sites exclusively for those with herpes have been created. These sites are life savers for a lot of people and are solely responsible for tens of thousands of relationships being formed in recent years. These are some of the best dating sites for those who suffer from herpes.

Best Herpes Dating Apps & Sites With The Most Users 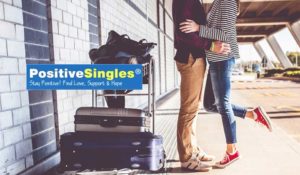 Positive Singles is by far the most popular dating site in this niche. It has the most users and the best reputation as far as dating sites for individuals with herpes go – after all, the site was founded in 2001 and is now well over 20 years old. For a dating site, that is extreme longevity. Most dating sites get flushed out in a few short months/years! One important distinction to make about this dating site is that it is not only for individuals with herpes. The only requirement you need to meet to use this dating site is to have an STI – this can be anything from herpes, to chlamydia, HPV, and even HIV. With the introduction of COVID-19, the site recommends that users also disclose their vaccination status, though this is not at all necessary and you can withhold this information.

So what can we say about Positive Singles? With over 2 million members and growing every single day, it is by far the best dating site/app to use for those with a lingering sexually transmitted disease. There are members in pretty much every major US city and even in some other Western countries such as Canada and the UK. The users are real and very non-judgemental. After all, everyone on this site is suffering from some sort of STI. It is a very supportive community and meeting people is very easy with Positive Singles. These are just some of the features you will benefit from when using Positive Singles: 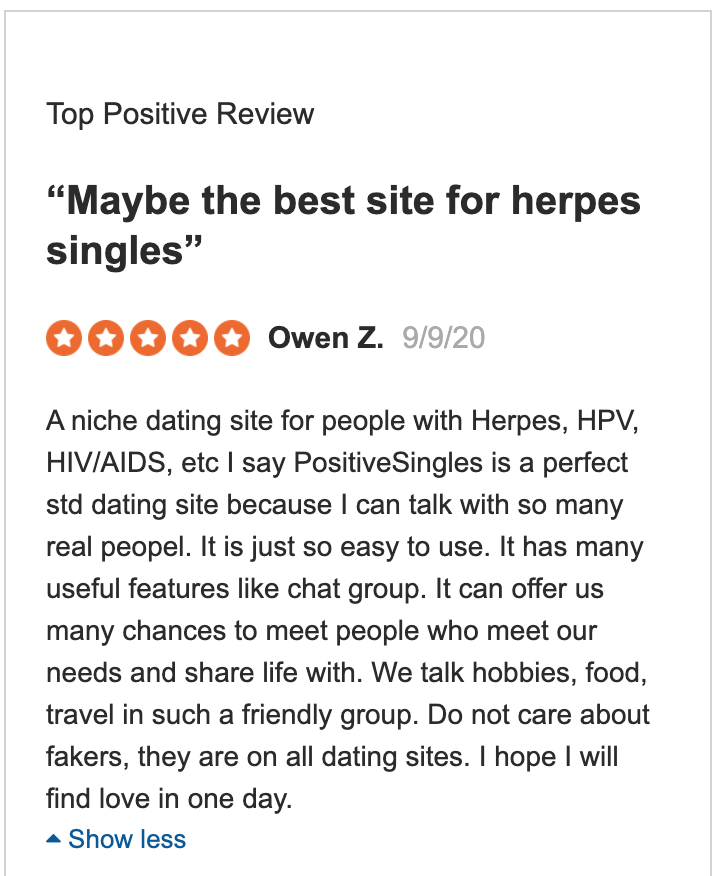 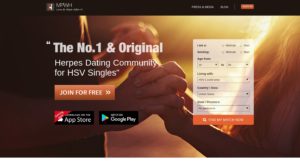 MPWH, also known as Meet People With Herpes is an extremely popular herpes dating site. The only reason that this site falls slightly below Positive Singles is that there are slightly fewer users on it. As the title suggests, this dating platform is dedicated towards individuals that have herpes whereas Positive Singles is for anybody who has an STD, period. If you’re someone that is looking to meet others that suffer from herpes specifically, then you will probably enjoy this site more than Positive Singles anyways.

MPWH is great because it feels more intimate than many other herpes dating apps. The connections you can make on this site are potentially going to be deeper and stronger than they would be on other sites. Nobody understands the troubles that a herpes sufferer goes through better than another herpes sufferer. What separates this dating site from many others is that they have many unique features that are not offered by other dating services. They also offer a free trial which makes things a lot less stressful for new users. Some features offered by MPWH include:

HSV Singles is a pretty great platform that is growing steadily every month. The users are real and authentic which is vital for a dating platform to be any good so from that perspective, it’s already a success. Our biggest issue with HSV Singles is that there just aren’t enough users on it to make it viable unless you live in a city like New York City, Los Angeles, or Miami. Even in a pretty massive city like Dallas or Seattle it can be quite difficult to find other users on there. Otherwise, it is nearly perfect platform. Signing up is easy and there are many features on here that you could find on a site like Positive Singles.

Although the total amount of users is disappointing, it’s important to keep in mind that the platform is still growing. We definitely recommend MPWH or Positive Singles above this platform for at least the next year, but things could change. If HSV Singles gains traction, it could easily start creeping up on the other dating apps on this list. Dating sites for people with Herpes are popping up all over the place and this list could be changing in the near future.

Having AdultFriendFinder on this list might surprise a lot of people, but it is actually quite a viable platform in this case. Although this platform doesn’t advertise itself as being specifically geared towards people with STD’s or herpes, you can certainly find others that suffer from herpes on this platform. The problem here is that there are many users who don’t suffer from herpes which could be a problem, but if you are clear with your situation from the very start, one can definitely find success and even a loving relationship on AdultFriendFinder. We’ve reviewed this platform in the past so be sure to check that out.

Look, dating as a person with herpes is always tough on a general dating site like AdultFriendFinder, Tinder, or eHarmony. However, it is not impossible. The reason we have AdultFriendFinder on this list and not something like Tinder is because we’ve found that people are more open-minded and less judgemental on this platform. This means that as a person with herpes, you can more easily connect with both individuals that do suffer from herpes, and those that don’t as well. 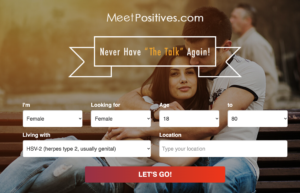 Meet Positives is a relatively good platform, however it suffers from many of the same issues that HSV Singles suffers from. This includes the fact that it is a newer platform with fewer users on it than many of the others we’ve discussed in this article. The main difference between Meet Positives and HSV Singles is that Meet Positives allows anybody that suffers from an STD on their platform, just like Positive Singles. This means you can cast a wider net in your search (so long as you’re okay with dating someone that has a different STD and not herpes).

One great thing about Meet Positives is that they might just have the best app out of all the platforms we mentioned. It’s extremely intuitive and easy to use which unfortunately can’t be said about all dating apps these days. The user interface and usability of Meet Positives is really hard to beat and in my personal opinion, second to none. For that reason alone, this herpes dating platform deserves to be mentioned amongst the best. Having a great app is vital.

It’s no secret that there are a TON of dating sites made specifically for people with herpes. There aren’t just five of them in existence (otherwise we’d have a serious problem on our hands). We used a very specific criteria to determine that these were the best herpes dating platforms to use this year. The main things that we took a look at were:

Individuals who don’t suffer from herpes might not understand why these dating sites are as important as they are for sufferers of herpes, HSV-2 in particular. This is a disease that you carry for life and it is not exactly easy and/or simple to explain to a new partner that you are a sufferer. Herpes and STD dating sites make the process a whole lot easier by eliminating the awkward part entirely; everybody knows what they’re dealing with. Nobody is surprised to find out that they’re communicating with someone that has an STD because that is what the platform was made for.

If it wasn’t for these dating sites, the unfortunate truth is that many of these people would end up alone. A lot of people unfortunately feel that they are unworthy of dating or feeling affection once they have an STD. Before the inception of many STD dating apps, people would just refuse to put themselves out in the dating marketplace due to embarrassment, fear of rejection, and a plethora of other reasons. These sites fixed many of those issues. 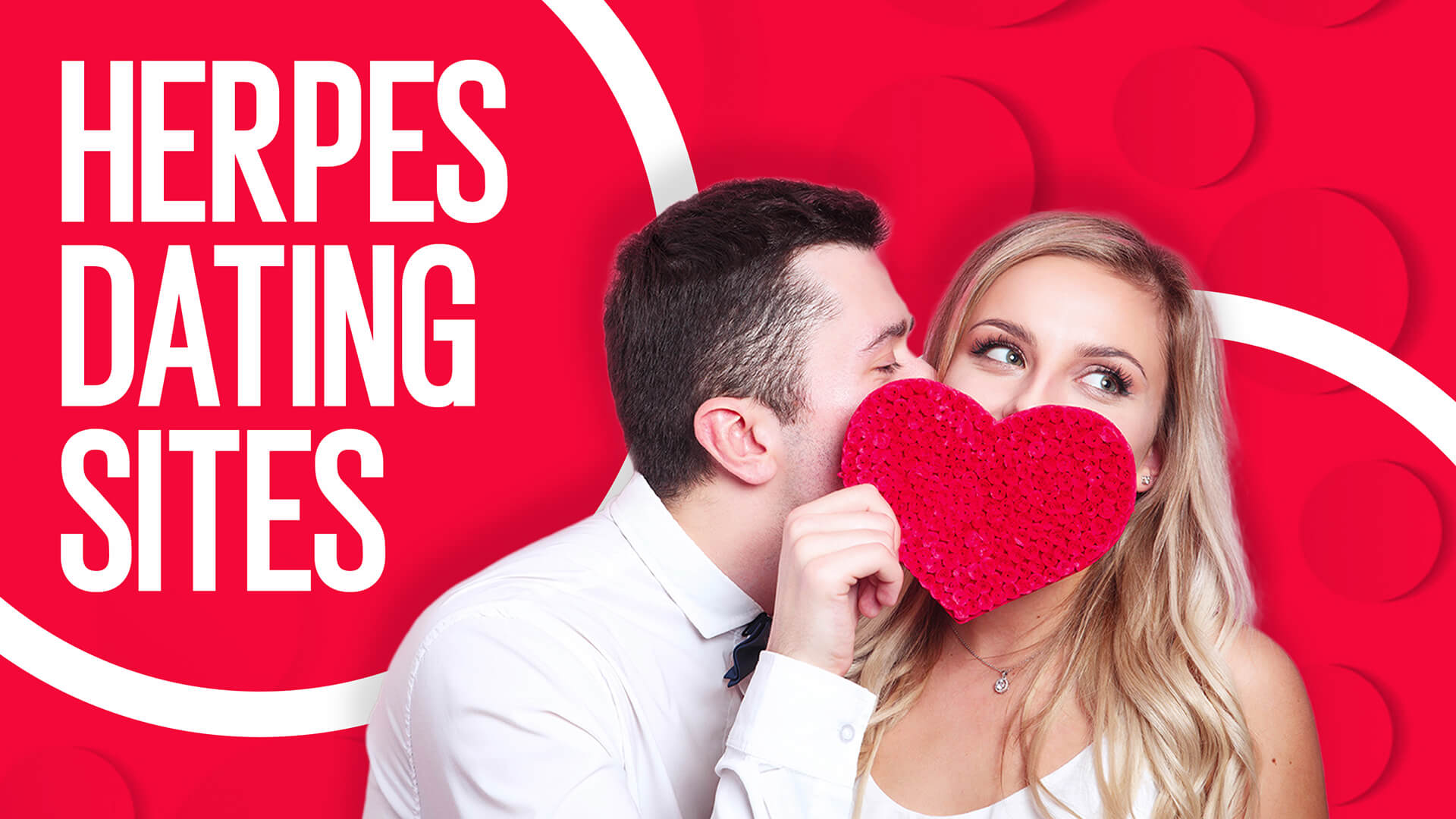 Can People With Herpes Use ‘Normal’ Dating Sites?

Technically yes. There is nothing stopping someone with herpes from registering on a site like Tinder or Match. The problem we’ve found is that most people who suffer from an STD or STI would rather not register on these sites to begin with. They do not want to put others at risk of catching whatever they’ve got, and they certainly don’t want to go through the awkward conversation of having to explain their situation to every single person they come across. So while individuals with herpes are free to use any site they please, most of them would much rather use something else such as Positive Singles or MPWH.

If you do go ahead and register on a dating site that isn’t specifically catered for those with herpes or other STD’s, make sure you do the responsible thing and disclose your condition before having sex with anybody. While hundreds of millions of people in the world have herpes, those without it would very likely prefer to not have it. The last thing you want to do is go around infecting unsuspecting victims because of your failure to disclose your condition.

Bottom Line: Dating With Herpes is Much Simpler When Using Herpes Dating Sites and Apps

If you are someone that has herpes and have never used a platform specifically geared for people with HSV-1/HSV-2, then you’re likely in for a surprise. These platforms are completely judgement-free and you can talk about your experiences with the disease freely. You don’t have to feel awkward about disclosing certain information because everyone else on the platform will either also have herpes, or some other illness. The common theme though is that most STD dating sites are made up of people with herpes anyways. Most other STD’s and STI’s such as chlamydia and gonorrhea can be cured entirely so there is really no reason to do that. These sites are mainly used by people who suffer from conditions that are not reversible, such as herpes and HIV. Regardless, the creation of these dating platforms have changed the game entirely and people who would previously not date at all are finding love.